BITURUNA, THE LAND OF WINE

In the city, it stands out the predominance of descendants of Italian immigrants, who spread their customs and their culture from the time of the colonization. Its traditions helped to shape Bituruna, which today is home to several ethnic groups and has more than 16 thousand inhabitants.

320 km from Curitiba, the climate is mild, ideal for the production of grapes, which moves the economy and local tourism, with the Wine Route. Other economic feature are due to the transformation of wood and agriculture, where the municipality has been growing over the years with the production of mate grass.

The city was installed in 1955, with the election of the first mayor. The construction, by the residents, was between hills and in homage to those who already lived there. Bituruna is a native name of the Tupi, which means Serra Negra / Monte Negro. It is a city with diverse attractions, charms and tradition. Do not miss it!

Visitors can get to know the vineyards, the process of making wines and juices, taste products, participate in a mini-course of harmonization, as well as visit an Italian museum and learn about the instruments that the settlers used when they arrived in the region.

The city is bathed by the waters of Alagado Foz do Areia. On local, sport fishing is allowed. There is a championship, usually held in the second half, attracting tourists from various places.

WINE PARTY
Promoted every 2 years, the Wine Festival is traditional in the region. The giant polenta is the main attraction on the opening day of the event with the image getting the age of the municipality. A party prepared with attractions for all ages brings together hundreds of people in the Park of Events.

GRAPE PARTY
Held together with the Rodeio Crioulo, the party is promoted annually at the peak of the grape harvest (beginning of the year). It attracts lovers of the fruit and its products in the Park of Events.

MATE HERB
The most recent activity developed in Bituruna, the Mate Herb Festival takes place every two years, intercalated with the Wine Festival. A leisure option with food court, shows and activities for the development of the productive toward of the herb mate.

ATTRACTIONS
Taking a photo on the giant wine bottle is one of the attractions of the city. The monument is 18 meters high and is at the intersection of the PR-170, which cuts across several neighborhoods of the city. The demijohn is the symbol of Biturun's culture, because it is the land of wine. 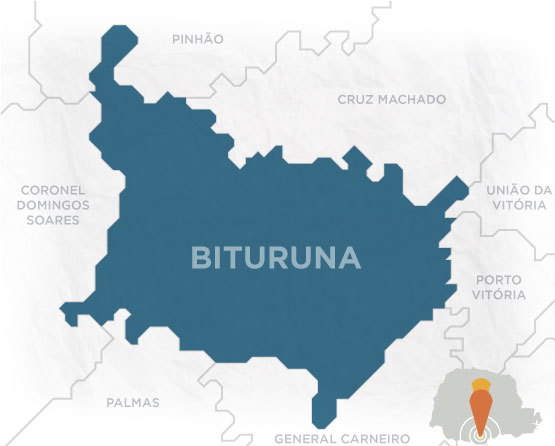 Wine Route
Statue of Santa Barbara
Clover of the Garrafão

Colonisers Square
Built in 1995, the square takes its name in honor of the settlers of Bituruna. Visitors can walk and rest in the shade of native trees such as araucarias, imbuias and bracatingas.

Religious Monuments
The monument in honor of Santa Barbara, patroness of Bituruna, is the largest in Paraná and the largest in the world, with 34 meters. Located at the highest point of the city, it offers privileged views. The place is open for visitation and the chapel is open during the day. The devotees can still visit other places of interest, such as the statue of St. Anthony, Portal São Francisco, and also the Monument of the Bible, which is six meters high, in the Praça Remoaldo Benazzi. There, guests can enjoy outdoor activities at the gym of the best age.

Bet Line Leisure Area
A place of leisure for the whole family. The Park has a restaurant, kiosks, camping, bocce court, sand volleyball, Swiss football and much more! Due to the access to the Alagado do Foz do Areia, boat trips and water sports are allowed.

Leisure Area Grand Tour
The park promotes an environment of contact with nature, ideal for walks with family and friends. There is food court, soccer field, area that allows the practice of sport fishing and other water sports.

Due to local colonization, the city's gastronomy dominates Italian cuisine, such as polenta, artisanal pasta, salami and cheeses, as well as the wine cellar, great to accompany the afternoon coffee. Also present at the table of the biturunenses barbecue roasted in the coal, in the best style champion.