CAMBÉ, CITY BUILT BY
THE HANDS OF COLUMNS

Cambé originates from the Tupi language - "caá" means forest, tree, and "mbê", aerial roots. The area where the current municipality of Cambé is located comprised an immense forest and in these lands lived several indigenous peoples. In January 1932, the rural settlement of Nova Dantzig was founded - in homage to the homonymous German city, where the first families arrived. The place was renamed Cambé in 1943 and emancipation took place on October 10, 1947.

Currently, Cambé has, according to IBGE data, an estimated population of 105,704 people. The municipality has soy-based agriculture and has a rich industrial park, but tourism in the city also stands out. Attractions such as the Luminous Fountain, the Zezão Municipal Park, the Danziger Hof Municipal Historic Park, the Cambé Historical Museum and the Feast of Nations are some examples of what the city has to offer.

Historical Museum of Cambé. Founded in 1985, it brings together all kinds of documentation about the city and develops projects, such as the Cadernos de Memória.

The municipal park called Zezão, considered the true postcard of the city, and the Municipal Historical Park "Danziger Hof", which is part of the Neo Danzig colony, a nucleus of German immigrants from the city of Danzig.

The Light Source, built in 1963, was restored and reactivated in 2005, and the Santo Antônio Parish.

CULTURE
The Cambé Cultural Center, inaugurated on November 1, 1990, with the purpose of promoting culture, has a modern architecture and was specially created to house the Cambé Historical Museum. In the Cultural Center, there is also the Municipal Public Library.

NATION'S PARTY
The Festival of Nations values the rescue, preservation and dissemination of the history and culture of the municipality. It acts as a link between the first settlers and the present generations, celebrating, through gastronomy, dances and typical songs, the union of the ethnic groups that helped to form the city. The event coincides with the commemoration of Cambé's political emancipation anniversary, October 11. 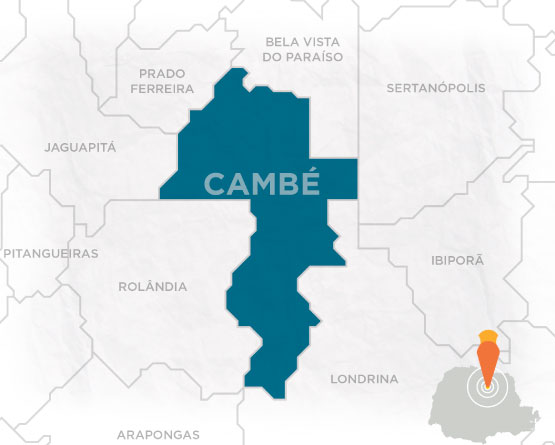 Parque Zezão
The municipal park called Zezão, in the central part of the city, located in a valley bottom, is considered the true postcard of the city. Well-wooded, with a large grassy area and a stream, Zezão also has hiking trails, a small park and an amphitheater with bleachers.

Historical Municipal Park "Danziger Hof"
The Municipal Historical Park "Danziger Hof" is part of the Neo Danzig colony, nucleus of German immigrants of the city of Danzig. In the park, you will find the home of the Tkotz family, built at the beginning of the colonization. It was acquired by the City Hall in 2000 and transported to the historical park, where cultural activities are held today. Another house is the Zifchak family, seat of the park, which was also acquired by the City Hall and transported to the historical park.

Historical Museum of Cambé
The Historical Museum of Cambé was founded on October 30, 1985, with the objective of rescuing and preserving the history and memory of the peoples who colonized the city. Its collection consists of photographs, documents, objects, magazines and books, as well as archaeological material from the indigenous peoples who inhabited the northern region of Paraná. It is located in the Cultural Center.

Although Cambé doesn’t have an airport in its limits, the one of Londrina is only twelve kilometers of the city.

Cambé doesn’t have a typical dish, but to compensate, it is easy to find flavors of all peoples. The restaurant chain is well diversified.