ON THE PATH OF PROGRESS

Known nationally as Carne do Carneiro in the Hole and home to the largest agro-industrial cooperative in Latin America, Campo Mourão has become accustomed to the titles of cultural and economic importance. Located in the Center-West region of the State, the city of 95 thousand inhabitants is a micro-regional polo that serves as reference to 25 municipalities and more than 357 thousand people. Precisely because of the privileged location, it is part of the integration routes to the main urban centers of the country and Mercosur.

The main economic source of the municipality is agriculture. The same purple and fertile land that generates wealth was responsible for forming the basis of local society. The pioneers began arriving in the municipality in the early nineteenth century. The gauchos and the Santa Catarina migrants left in the west of Paraná due to the attraction for the quality of the soil and because of political problems.

Since then, the fertile fields, still sparsely inhabited, have gained geographical limits, but have overcome growth barriers. Campo Mourão became the 21st most populous city in Paraná and gained fame thanks to a religious episode: the miraculous cure of a boy of 12 years led to the canonization of Santos Pastorinhos Jacinta and Francisco.

The Route of Faith is a good option for religious tourism, with pilgrimage through the main points of the city and the region.

The fitness enthusiasts who do not also lack clean air and beautiful scenery, have nature walks, nature trails and an open-air gym.

In the main sights of Campo Mourão, the attractions are in the water. From the adrenaline of nautical sports to the calm of fishing, not forgetting the fun ride on the pedal boat. There are many options for those who enjoy refreshing activities.

SHEEP PARTY IN THE HOLE
Main event of the city, the National Festival of the Ram in the Buraco is held annually in the month of July in the Exhibition Park Getúlio Ferrari. For five days, the site receives an average of more than 150,000 people. The main attraction happens on Sunday, when the typical dish that gives name to the festival is served. However, two pre-lunch rituals, which are beneficent, draw a lot of attention: the "Guardian of Fire" show which presents the story of the ram's creation in the hole; and the "Fire Ritual", which corresponds to the lighting of the holes where the meat will be cooked. The fire is conducted in courtship by local authorities.

WALKS IN NATURE
The circuit of Nature Walk in Campo Mourão, made in the rural area of ​​the city, brings together about 600 people. The event is part of a global initiative to stimulate sustainable territorial development organized by the International Federation of Popular Sports in France.

PINOCHE COMPETITION
Picturesque local event, the Pinocchio Causes and Lies Competition entertains the audience, while encouraging the folk tale of "causos". The biggest lie winners in adult, child and senior age categories win trophies and cash prizes. Even those who attend the performances are rewarded with the guarantee of good laughs 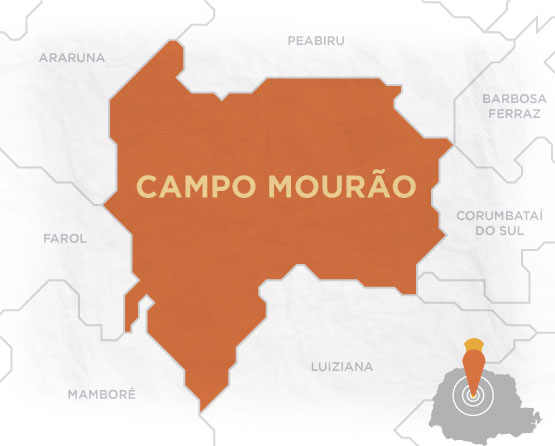 Considered one of the most beautiful churches in Paraná, São José Cathedral is confused with the recent history of Campo Mourão. The construction started in 1942, but completed only in 1968, features clocks with four time zones and a bell that announces the activities performed in the interior. The temple is at the most central point of the municipality.

One of the city's top postcards, Lago Park is the community's favorite hangout. Ideal for sports, the site has sports arena, sand court and outdoor gym. A Cooper trail lets you hike through the woods. Greenhouse, orchid garden and a French garden enhance the beauty of the landscape. In the lake, which has several species of fish, you can go for a paddle or kayak. Children can have fun in playgrounds and, if hunger strikes, there is a snack bar. There is an acoustic shell that hosts artistic-cultural events. It is also worth to visit the Sanepar Eco-museum.

With 11.3 km of extension and a lake of 70 million cubic meters of water, Parque Lago Azul is the largest leisure area of ​​the municipality. The place is known for the practice of nautical sports and fishing, but also has ecological trails, reforestation area with native and exotic species, and the Environmental Education Center.

The visits must be scheduled at the Environmental Institute of Paraná.

Surrounded by private farms, the Mourão Dam is ideal for water tourism, fishing and tours.

Campo Mourão is one of the largest road junctions in the state. Through the city, pass the highways PR-487, PR-317, BR-272, BR-158, BR-369, as well as asphalted road to Araruna. The distance between the city and the capital of Paraná is 451.6 km, a journey that lasts little more than 6 hours.

Among the lodging options are medium-sized hotels and a country inn.

Since 1990 Campo Mourão has a typical dish: the mutton in the hole, which is placed in a 30-inch pan with metal lid, cooked in a 1.5-meter-deep hole by 1.05-meter opening. The origin of the delicacy refers to three pioneers of the municipality who, in the 1960s, were inspired by a film of cowboys to create the recipe.

The city also has several options of gastronomy, ranging from pizzerias, snack bars and steakhouses to traditional and typical restaurants.