THE CITY THAT BREATHES
CULTURAL DIVERSITY

Emancipated only in 1995, Carambeí has a lot of history to tell. Indigenous, muleteer and European immigrants - mainly Dutch - shaped the cultural identity of the city of just over 22 thousand inhabitants, which is in the region of Campos Gerais.

This multicultural heritage follows alive and is expressed in different segments. In the economy, there is the Dutch pioneerism. Following in the footsteps of the settlers, who founded a dairy cooperative (the first in Brazil), Carambeí is one of the main dairy basins in the country and it houses, in the local factory sector, important national and multinational dairy industries.

In art and culture, the influence of European immigration is evident in architecture, gastronomy, museums and parks, but mainly in the spirit of the people, who seem to have the vocation to celebrate the deeds and virtues of those who made this part of Paraná their new home.

The city is marked by immigration, mainly the Dutch. Parks, museums and monuments depict the history and culture of the settlers.

Cafes and confectioners offer the best of the influence of immigration in cooking, especially the Dutch pies.

Chapels, sanctuary and a bible monument are great options for those who cultivate religiosity.

TEMPERATURES FOR ALL TASTINGS
The average annual temperature of Carambeí is pleasant - 17 degrees. But, depending on the time when you visit the city, it is good to be careful. Summers usually register temperatures in excess of 20 degrees. Already in the winter, the thermometers can approach zero degree. The occurrence of frost (and even snow!) Is not uncommon.

PARTYING THE WHOLE YEAR
The calendar of local festivities is hectic. In the first semester, the Immigrant Feast celebrates the cultural diversity resulting from the different groups of immigrants who have settled in the region. At the same time, there is the ExpoFrísia (Agricultural Exhibition of Carambeí), dedicated to the novelties of agricultural genetics and cooperativism. December is the month of the Feast of St. Nicholas (SinterKlaas, in Dutch), which, according to Dutch culture, is the predecessor of Santa Claus.

FESTIVAL OF THE CAKES
The visitor who does not dispense a good gastronomy can not fail to know the Festival of the Tortas. The traditional event, which put the city on the gastronomic tourism route, celebrates the Dutch habit of consuming pastries with tea in the late afternoon. And this celebration is done in the best way: with a varied menu of delicious pies, different flavors and preparations, one more irresistible than the other. 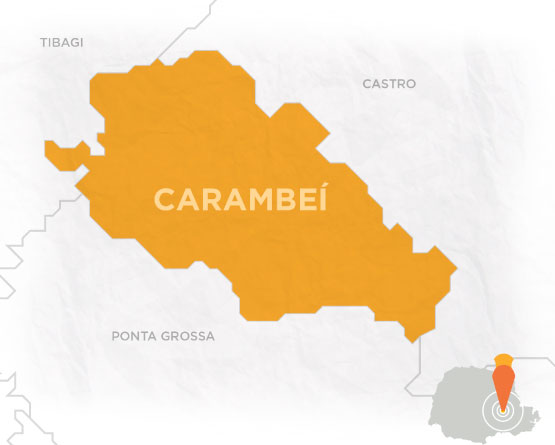 Carambeí Historical Park
Carambeí Historical Park is an open air museum dedicated to the rescue and preservation of the memory and legacy of Dutch immigration. With an area of 100 square meters, it is subdivided into five wings: the House of Memory is the center point of the place and it keeps the historical collection of the city. The Historical Village is an architectural ensemble that houses replicas of houses, a school and a colony-time train station. The third wing is named Parque das Águas, an environmental museum that depicts Dutch hydraulic technology, has typical houses and an artificial lake. The Amsterdam Cultural Center reproduces one block from the Dutch capital and stimulates the relationship between people through artistic and cultural manifestations. An exhibition center for multicultural events makes up the fifth and last wing of the Park.

Orchid and Taman Batoe Cactus
In a stone house that has in the background the beauty of the Campos Gerais, the protagonists are cacti and orchids of more than one hundred native and exotic species. But the ride is not just for the eyes. The place also offers the best of Indonesian cuisine. It is a veritable explosion of visual sensations, olfactory and gustatory, which becomes even more beautiful in the late afternoon, when the sun goes down. Visits should be scheduled.

The access to the city is only road, by the BR-277 or BR-376, for who leaves of Curitiba. The car trip takes about two hours. By bus, the route is covered in 3 hours, on average.

The city has good hotels to host visitors.

The multicultural heritage conferred a diverse range of flavors to local cuisine. The dishes reveal the influence of the horsemen and the European immigrants. The taste can also capture traces of Indonesian gastronomy, thanks to the colonization of the Netherlands in that country. However, the taste that stands out is even that of the Dutch culture. In addition to the traditional and delicious pies, one of the most famous delicacies is Oliebol, a sweet and fried cookie which reminds of the rain Brazilian cookie. It is possible to taste these delicacies in the patisseries and cafes, which are famous in the city.