Colonel Cornélio Procópio de Araújo Carvalho, outstanding personality in the Empire, gives name to the city. The military was patron of the station of the then "KM 125", landmark of the expansion of the region. The construction of the railroad is integrated to the colonization, advent and development of the municipality. From there came the English and Portuguese adventurers and workers, in addition to the pioneers from the states of São Paulo and Minas Gerais. In January of 1938, the commission formed by personalities living in KM 125 created the city of Cornélio Procópio.

The territorial area is 625.6438 km² and the population is estimated at 47,847 inhabitants, according to IBGE survey. The municipality is an important student center, agricultural, commercial, industrial, with the highest ICMS collection of the entire region. In addition to trade, the field, grain production and product processing, the potential is also perceived in the segment of events, business, leisure and entertainment.

In the Promenade Francisco Reghin, besides having active commerce, it is possible to make purchases and it is also a space of leisure to observe the movement of the city.

The Mata São Francisco State Park was created in 1994. The area has an environmental preservation area with 832.57 hectares, formed by the Atlantic Forest. Located 4 km from the city center, the park has trail, bridges, snack bar, toilets, and Portal, which is the house of attendants. There is also the Municipal Forest Manoel Júlio de Almeida, created in 1967 and was part of the Atlantic Forest of the Northern region of Paraná. The space has infrastructure for walking, leisure, physical activities and studies of fauna and flora.

MOON FAIR
In Botafogo Square, every Tuesday, from 6 pm, there is the Moon Fair, bringing families together. On local, tents with craft products, gifts, and live music, food court, and toys are set up.

STREET CARNIVAL
The Cornélio Procópio Street Carnival is the best in the region. The folia is marked by electric trio, bands and blocks that parade in Avenue XV of November. 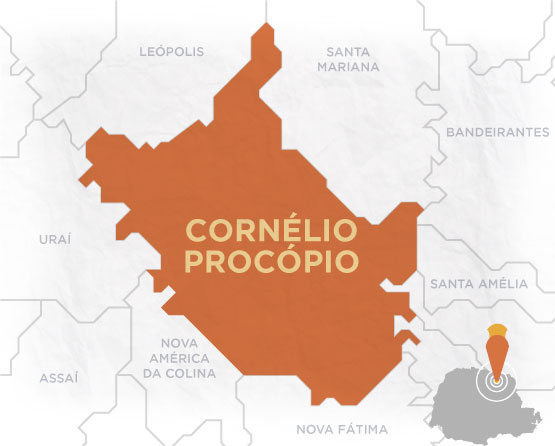 Monument / Memorial Cristo Rei
Built in 1958, the monument is the largest bronze statue of Latin America, almost 24 meters high. Installed at the highest point of the city, it offers a beautiful panoramic view with trees, skating rink, playground and snack bars all around. It allows leisure time for locals and tourists.

Historical Museum of Cornélio Procópio
Opened in June 2000, the space is located in the Historical Building (House of Culture Nair Mariucci Azzolini). Cultural collection with objects, instruments, furniture, clothes of the pioneers shows the history of the municipality and the colonization. It also has the full-size replica of the first commercial establishment, as well as scenarios, mockups and photos of the city's first decades.

Mozart Natural History Museum by Oliveira Vallim
Opened since September 2002, the museum is housed in the former KM 125 Railway Station. The collection contains about 1,500 taxidermized animals exhibited in its natural habitat, as well as archeology, indigenous anthropology, paleontology, geology and entomology. It is one of the most important tourist attractions of the municipality and one of the largest collections in South America. The collection is of the odontologist, biologist, taxidermist and professor João Aparecido Galdino.

São Luiz Lake
Place where locals take the day to relax in fishing. It is known for being the stage of the Regional Festival of Sport Fishing. Some take their children to have fun in contact with nature.

Although it does not have an airport, Londrina is 67 kilometers, following the BR-369. However, the drive to Curitiba takes about 5 hours.

Cornélio Procópio has a moderate hotel chain, where visitors can opt for hotels to their tastes.

Cornélio Procópio does not have typical food, but, because of the universities, the city is a student center, where snack bars, pizzerias and bars are easily accessible. However, it is possible to find casual restaurants of Minas Gerais food and even the most refined Japanese cuisine. Places for various palates.