Fênix is located 428 km from Curitiba, in the Center-West region of Paraná. The population, according to IBGE estimates is 4,903 inhabitants. The name of the city makes reference to the phoenix bird, which according to Greek mythology has been reborn from its own ashes, such as the municipality, which has risen from the ruins of Vila Rica, and today has great cultural, religious and historical value.

Dismembered from Campo Mourão in July 1960, Fênix is fortunate for its lush nature. One of the tourist attractions of the city is the State Park Vila Rica of the Holy Spirit, which has great beauty due to the nature around it and the most diverse endangered species that are there. Another point of visitation is the Igrejinha da Serra.

Fênix is a small, yet legendary town with lush stories, flavors and nature to meet. Don't let it out on your itinerary!

The Museu Paranaense works within the Vila Rica State Park of Espírito Santo. There, are exposed ceramics and artifacts of the Guaraní Indians, which were found on the local. The monitoring of archaeological research and historical surveys in search of identification of new sites are done in the museum.

The Fênix anniversary date is July 25. On this day the "Expofenix" takes place, with shows, handicraft exhibition and amusement park. On the same day of the event there is the "Festa do Prato Típico", where the fish is served in the ceramic.

In the Vila Rica State Park, the trails in the middle of the native forest last one hour. The visitor has contact with one of the last remnants of tropical rainforest of the region. There are perobas, figueiras, canelas and palmitos in abundance.

ECOLOGICAL STATION
Area of native vegetation. The proposal is to preserve the ecosystem, conduct scientific research and awareness activities, environmental education with full protection of biological diversity in the area.

RIVER RALLY VILA RICA DO ESPÍRITO SANTO
Participants go by boat on the Corumbataí River, down the Ivaí to the mouth of the Paraná River. Overnight stays are at strategic points along more than 300 km of navigation. The program attracts teams from different regions of the country. Programming includes fish release, planting trees, cleaning the Rio Ivaí and raising fishermen awareness.

ACYR JOSÉ CORREIA CULTURAL CENTER
Better known as House of Culture. In front, there is a light source with the symbol of the county, the phoenix bird. 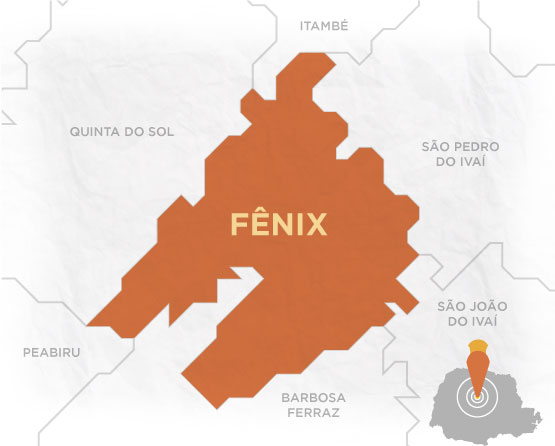 They are more than 350 hectares of nature. The park houses endangered species such as monkey nail, king vulture, juruva, quati and other animals. The site has visitor center, as well as museums, trails, lake and kiosks. It is the first state park registered by the Historical Patrimony, in 1948.

Also called the Santo Inácio de Loyola Chapel, the church was built on the edge of the ancient Peabiru Way, an ancient trail that stretched from the coast to Peru. Legend has it that "treasure hunters" dug the floor of this chapel because they believed the Jesuits had buried gold there.

The typical dish of Phoenix is the "Fish in the ceramic". The painted fish is served with rice, salad and pirão of manioc flour, prepared with the fish's own broth. It is possible to taste this delicious flavor in the Feast of the Typical Dish in July.