HISTORY, CULTURE AND NATURE ON THE RIVERBANKS OF THE PARANÁ

Cradle of the submersed Sete Quedas, Guaíra adds of natural beauties to records of the Jesuit colonization. The name of the city is from Guarani origin, whose meaning is hiding place, difficult to reach. Such nomenclature refers to the waterfalls, which made the Paraná River impassable, making navigation difficult.

Located in the extreme west of Paraná, the city gets its frontier by Paraguay and the state of Mato Grosso do Sul, with its region belonging to the natives until 1556, when it was occupied by the Spaniards. But it was only around 1900 that the municipality began to develop, with the beginning of the exploitation of yerba mate.

With an estimated population of 32,923 inhabitants, according to IBGE, the city's economy is based on agriculture (with corn, soybean and cassava), industry, commerce and tourism.

One of the most important points in the history of Guaíra was the impoundment of the Paraná River, in 1982, for the construction of the dam of the Itaipu Hydroelectric Plant. With this, the famous Sete Quedas, which at the time had the title of greatest cataract in the world in volume of water, were submerged.

In addition to knowing the wonders of fauna and flora and having contact with local history in museums and tourist attractions, the visitor to Guaíra has the option of taking a boat trip through the place where the thundering water falls. At this point of the river, the currents are stronger, being possible also to observe some rocks that formed the walls of the waterfall. For sure an unforgetrable ride.

If you like to relax and enjoy fishing, Guaíra has good options for practicing the activity. The waters of the city also allow you to practice sports such as wakeboarding, kayaking, rowing and stand up paddle.

Walk through the native woods at the edge of a river, follow the footsteps of the animals, be watched by the monkeys. So is the walk along the Ecological Trail Êdela Toldo, a Private Reserve of Natural Heritage (RPPN) with 57 hectares of area. In the one thousand-meter walk, tourists can observe the rich local fauna and flora, refreshing themselves by drinking water from the source.

In addition to contemplating the grandeur of the Paraná River, tourists can relax on their waters, the second largest South American river, with a total length of 4880 km. During the summer, you can still enjoy leisure time on the sandbanks that form at some points along its banks.

VISIT THE PRODUCER'S FAIR
A tourist looking for fresh and healthy food can not miss the producer's fair in Plaza Duque de Caxias, open every Wednesday night and Saturday morning.

MEET THE BIGGEST CHARITY EVENT IN PARANÁ
Among the various parties during the year, in April, the Festival of Nations takes place in the city, an event whose objective is to raise funds for the social entities of the municipality. It is also worth mentioning the traditional Border of Milk, moment of the fair that stimulates producers through lectures and competitions, such as the Delights of Milk competition, which awards the best sweet, cheese and milk drink. Those who are in the city need to check out this event full of tradition, good gastronomy and musical shows.

Located about 680 km from the capital, it is possible to arrive the city by the BR-163 and BR272 highways. The nearest air access that operates commercial flights is Cascavel Airport, just 154 km from Guaíra.

To restore energy, the city has a diverse hotel network, with more than 700 beds available to tourists.

Who visits the city cannot let to taste experience the Pintado na Telha, typical dish whose preparation follows the Indian technique. Fish was the basis of food in the villages.Its preparation in the tile also derives from that time, since the clay was the main material for construction of the objects of the tribe. The result is a peculiar taste, enhanced by onions, peppers, tomatoes, palm oil, salt and coconut milk. As an accompaniment, it is usually served rice, pirão and farofa. To the superstitious on duty, the legend in town reads that the consumption of the fish helps in memory, ends the weaknesses of the body and gives more disposition. 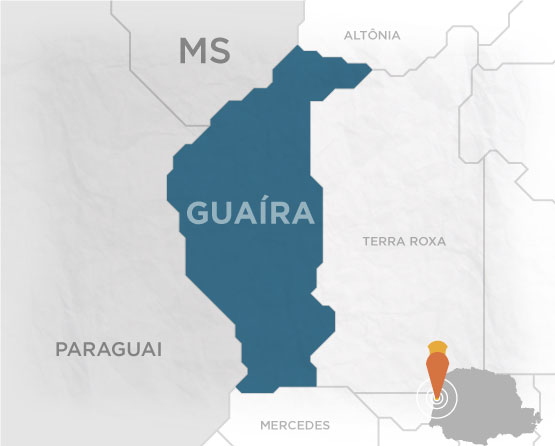 Church Nuestro Señor Del Perdón
Temple of history and faith, the construction stands out for the crude stones embedded, Norman architecture and stained glass windows of Hispanic-Argentine origin. Already the images of saints with indigenous features, such as Ignacio de Loyola and Roque Gonçalves, evoke the catechesis of the Jesuits. It was inaugurated in November 1934 by Mate Larangeira Company (due to founder Thomas Larageira), and is open for visitation every day.

Nautical Recreation Center
With a beautiful staircase and seven pavilions arranged in a circle, the building refers to an indigenous village and is the scene of various events in the city. The infrastructure of the place is very broad containing, for example, forest for hiking, cycling trails, poliesportivas courts, artificial lagoon, camping area, grills and marina with mooring. Guarantee of leisure moments for all ages.

Kartódromo Ayrton Senna
With only 700 meters of extension, the place received in 1982 none other than Ayrton Senna, during the Brazilian Championship of Kart. With ease, the rider won the three batteries, leaving his name recorded in the history of the city. Today, besides hosting karting championships, the place is also used by people in the practice of physical activities.

Cinema Theater Seven Falls
Characteristic for its exposed brick walls, the space supports up to two distinct audiences, one internal and one outdoor, in the open air, according to the event. The local has a capacity for 164 people and is constantly used for the screening of films, plays, concerts and artistic presentations.

Atelier do Frei Pacífico
Dedicated to the preservation of fauna and flora, the former Franciscan friar was responsible for the reforestation of the São Francisco Island, on the Paraná River. The collection has approximately 300 pieces made of wood and ceramics, reminiscent of the beauties of nature and indigenous culture. The place can be visited by appointment, and the works of the artist and writer can be purchased.

Lagoa Saraiva
With dark and mirrored water, the natural lagoon is located on Ilha Grande, about 20 km long and 10 to 12 meters deep. The site is considered an ecological sanctuary, conducive to the reproduction of species.

Ayrton Senna Bridge
In honor of the unforgettable Brazilian and Formula 1 world champion, the bridge connects the city of Guaíra, in Paraná, with the municipality of Mundo Novo, in Mato Grosso do Sul. Built on the Paraná River, in its only stretch not dammed, has 3,600 meters of extension, being also way for the tourism of purchases in Salto Del Guaíra, in Paraguay.

Museum Seven Falls
Indigenous artefacts, taxidermized animals and period pictures present in the museum perpetuate local history and culture. The building with more than a century was already headquarters of the company Larangeira Mate, and some utensils of the industry are also present in the collection of the museum.

Locomotive #4
Exposed in the Praça Eurico Gaspar Dutra, the locomotive refers to the first railroad of the west and northwest of Paraná, which connected the municipality of Guaíra to the district of Porto Mendes. It was built in 1917 by Mate Larangeira Company, with the initial purpose of transporting yerba mate and hardwood. Later it served as transport of the tourists who wanted to know the Seven Falls.

Ilha Grande National Park
Lots of water and lots of greenery. Created in 1997, the Ilha Grande National Park is one of the largest areas of environmental preservation in Paraná, combining in its vast ecosystem the best of the cerrado and the wetland. Its area covers eight municipalities, in addition to Guaíra. Open every day for visitation, the tourist can sail and even swim on the banks of the Paraná River. Besides the numerous beauties of the fauna and flora, the historical and archaeological sites in the areas of occupation of the Jesuit cities and the Xetá Indians stand out.