The island is the sanctuary of dozens of species of animals and plants. It is located to the north of the Bay of Paranaguá. The territory is part of the National Park of the Superagui, along with the Valley of the Patos River, which includes the islands of Peças, Pinheiro and Pinheirinho. The region is considered by Unesco as a Biosphere Reserve and World Heritage Site. 150 km away from Curitiba, the island belongs to the municipality of Guaraqueçaba, near the Paraná border with São Paulo. The scenery, which includes mangroves and restingas, attracts a great diversity of animals, some threatened with extinction, such as the black-faced lion tamarin and purple-headed parrot. Botos are easily seen swimming among the fishing boats moored in front of the island, which has about 700 inhabitants. The deserted beaches and ecological trails help preserve endemic species, marine life, fauna and flora of the reserve.

It is about 3 kilometers, which connect the village to the deserted beach. The period between March and April is the most indicated for bird watching. At that time, there is a great diversity of species, because of the migration of birds from the Nordic countries to the island. A stretch of the trail may flood according to the tide. Even so, the route is easy to cross.

It is the perfect beach for long walks, which can last between four and seven hours. They are 38 kilometers long. During the tour, which can also be done by bike, the company of the sea and the surrounding Atlantic Forest shows us a unique scenery and gives the feeling of solitude in the middle of the generous nature. You might go out in the morning or early afternoon to go through this stretch. Near the village, a river of clean and dark water flows into the sea of Barra da Lagoa.

Take a bottle of repellent and reapply several times a day. Before leaving for the trails, reserve a bag with snacks and water. Spraying sunscreen and wearing a hat is also essential for anyone who breaks the island.

For those who stay for a few days, the tip is to navigate the canals that lead to the neighboring islands, such as Ilha das Peças, where there are restaurants of homemade food and dolphins swim in peace.

In the island, also the Cataia is produced, known as the " whiskey of Cachaça". It is a species of cachaça made from the leaves of a bush found in the park.

In Superagui there is no cell phone signal, no pharmacy or ATM. 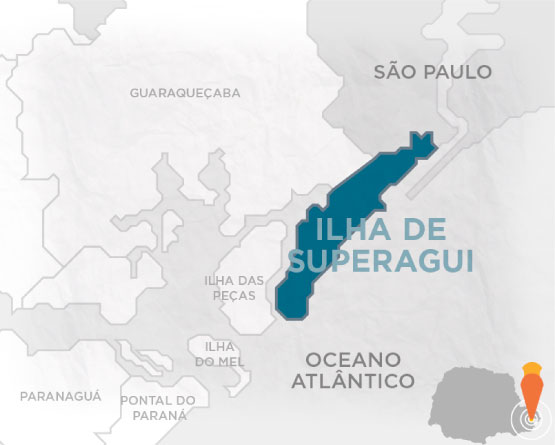 Deserta Beach
Island of the Parts

Barra de Superagui
It is where the inns, restaurants and campings are concentrated. There are no cars on the island. The rustic village has colorful houses, very simple, made of wood. If you go to the island on a weekend, look for the Akdov's Bar. It is the stronghold of the residents for fandango, popular dance typical of the coast of Paraná.

The beach in front of the village is perfect to see the dolphin, which usually swim among the fishermen's boats that are moored there. Some boaters take the tourists to the nearby islands that are part of the National Park. Leaving early, it is possible to walk the nearest ones in a single day.

Island of the Parts
Located between Superagui and Ilha do Mel, it is in a strategic position to see shoals of dolphin. The best route is inside the bay. The sea outside is often very turbulent.

Barbados
The trees of this island are the natural dormitory of the purple-headed parrot, threatened with extinction. Every evening, hundreds of couples return to the island in a large flock. The small restaurant of Seo Leo is the attraction of the fishing village.

Sebuí Reserve
After the boat ride, you have to walk for almost an hour on a trail in the middle of the woods. The major attractions are the waterfalls, with crystal clear waters.

The only way to get to the island is by boat. You can leave from Guaraqueçaba, Ilha do Mel or Paranaguá. The trip lasts an average of three hours, depending on the sea conditions. If you prefer, you can go flying. It costs a little more expensive, but the route is faster.

The few inns are quite simple. Almost all buildings are made of wood. In the rooms, there is usually a fan, air conditioning. TV and fridge are rarer to find.

There are few dining options on the island. During the week, there are usually no more than two or three open for lunch. Most only open on weekends. The menu vary from seafood dishes to snacks and appetisers.