Young, responsible and promising. This is Itaipulândia, a city of fewer than ten thousand inhabitants, located in the western region of the state, near Itaipu Lake and on the border with Paraguay. With only 27 incomplete years of emancipation, the municipality stands out for investments in education, basic sanitation and environment.

Despite its young age, the history of Itaipulândia began in the 1960s, when migrants of European origin arrived from Rio Grande do Sul and Santa Catarina. At that time, the future city was organized around an image of Our Lady Aparecida brought by the founder of the village. Therefore, the place was named Aparecidinha do Oeste. The official name only began to be forged in the following decade, when the construction of the Itaipu Hydroelectric Power Plant flooded half of the local arable land.

Today, the municipality with trees and wide streets is marked by the strong economy. Due to the royalties received as a way to compensate the environmental impact caused by the activities of Itaipu Binacional, Itaipulândia has one of the highest per capita incomes in the region. However, the main economic sector still is agriculture, mainly by the cultivation of soybean, maize and smoke. Despite this, industry, commerce and services have an important contribution to local gross domestic product. The growing tourist activity included the city in the script of the tourist destinations of the State.

Rural properties in the region receive visitors interested in natural beauties, warmth, good food and in the quiet of country life.

Patroness of the municipality, Nossa Senhora Aparecida attracts numerous visitors to Itaipulândia. A monument in honor of the saint - the largest in Latin America made in concrete - and the novena in honor of the one who is also the Patron of Brazil provide unforgettable moments of faith and reflection.

A tour of the Museum and the Municipal Palace is a journey into the history and culture of the city. Unmissable for anyone visiting Itaipulândia for the first time. At the end of the year, Illuminated Christmas brings beauty to the municipality.

Located on the border with Lake Itaipu, the city has the largest thermal water park in Latin America and an artificial beach. With good infrastructure and space for sports, the places are great choices for those looking for warm or refreshing waters. Fans of sport fishing and boat, canoe and sailing cruises are also welcome.

INTERNATIONAL FESTIVAL OF THE GOLDEN IN CARROSSEL
Every month of November, in the Balneário of Jacutinga, the International Festival of Golden Fish takes place on the Carousel, which celebrates the anniversary of the emancipation of the city. The protagonist of the event is the typical dish which gives name to the festival. But the attractions do not stop there: besides the traditional lunch, there are musical shows until late at night. In 2019, the party comes to the 19th edition.

VISIT THE MUNICIPAL BUILDING
Headquarter of the city hall, Paço Tancredo Neves is a beautiful architectural attraction. In addition to observing the details of the building, it is possible to see a mockup of the building. Covered by an acrylic top, it is just in the lobby in the entrance.

MEMORY HOUSE
The past of Itaipu and region is registered in photographs, documents and objects exhibited in the historical and cultural archive of the city. The natural beauties of the place are eternalized in the Acervo das Águas. Two mosaics of black and white aerial photography depict the beginning of the municipality: the first, from 1970, shows the forest giving way to urban space. The second, from 1980, already displays the land divided into lots.

WALKING IN THE SQUARE
Father Izidoro Royer Square is a great place to stroll, meet friends and get together with the family. Always at the end of the year, it is possible to watch cultural and musical shows there.

FISHING
With good infrastructure, the Nautical Base of Itaipulândia is a reference in the practice of sport fishing and also allows activities such as sailing and canoeing. The local also receive holiday events. 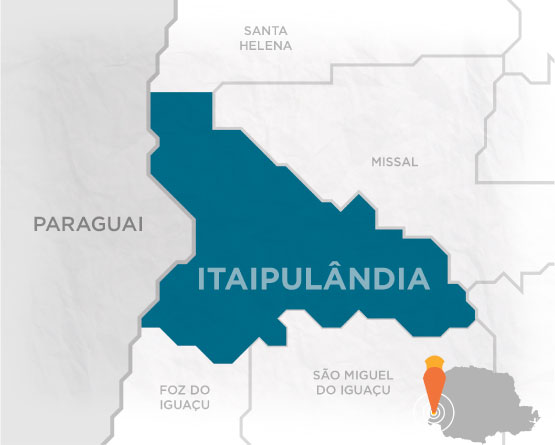 The Largest thermal water park in Latin America, it is located near the center of the city, on the road that gives access to Lake Itaipu. There are 260 square meters of attractions such as wave pool, aquatic roller coaster, water chateau and slow and wild rivers. Only toboggan are three options: four lanes, free fall and caracole.

Out of the water, you can spend energy on the sports court and also at the gym that is on the local. To replacing he energy , there are restaurants, snack bars and wet bars. A hotel, a medical center and lifeguards make the infrastructure even better.

Thermal water at 42 degrees is an added attraction.It has therapeutic properties and is rich in minerals beneficial to health.Want more?The park is still the stage for events and shows.

Located less than 5 km from the headquarters of the municipality, the artificial beach is 700 meters long and receives thousands of visitors every year.The space for camping is wide and well structured: it has kiosks, barbecue grills, bathrooms, locker rooms, chalets, restaurants and pier.For those who going by car, it has parking. For those who prefer boat, wharf.

Sports are also on the local's "menu". From December to March, ItaVerão takes place, a traditional sporting event that also offers cultural attractions.In other months, it is possible to exercise on the traditional and Swiss football fields, on the sand volleyball court and in an outdoor gym.To complete, a pavilion of events receives the celebrations of the city.

Monument to Our Lady Aparecida

Located in the highest point of the city - the community of Caramuru -, the monument is the largest in Latin America, made in concrete, in honor of Our Lady Aparecida. At 26 meters high, the image is only 12 meters shorter than that of Cristo do Corcovado, in Rio de Janeiro.

Imposing, the building, considered official by the Catholic Church, displays a mantle of almost 100 square meters studded with tablets. Inside, they are 80 square meters and finished in marble. The gateway has the shape of the map of Brazil.

The place is very frequented by believers to pay promises. On the holiday of October 12, when the saint is honored, the municipality receives about 7 thousand visitors.

Ideal for rest and family programs, the place offers sand court, outdoor gym, hiking trail and an artificial lake that guarantees more beauty to the landscape.The snack bar makes the ride more palatable. And there is also a space for cultural activities.

The hotel chain of the city counts on with hotel, inns and resort. The accommodation ranges from simple to high standard.

The typical dish in Itaipulândia is the golden fish in the carousel: fish roasted in a barbecue shaped like the famous toy of the amusement parks, created by a local resident.