KNOW THE PLACE OF NATURAL
AND RELIGIOUS BEAUTIES

If the tourist is looking for a place to rest and deepen spiritually, Jacarezinho is a city which can not miss in the travel itinerary. Located in the north of Paraná, on the border with the State of São Paulo, the city is known as the Pioneiro Norte Student Capital, due to its traditional high school and colleges that attract students from various parts of the country.

Cut by the Transbrasiliana highway (BR-153), Jacarezinho is bordered by the city of Ourinhos, São Paulo, and the municipalities of Barra do Jacaré, Ribeirão Claro, Santo Antônio da Platina and Cambará. The economy of the city is based on agriculture and tourism, with an estimated population of 39,435 people, according to IBGE.

Besides the exuberant nature, the cultural and historical wealth of the municipality is personified in religious buildings, a fact that put the city as a stopping point on the Rosario's Route. Music and performing arts are also present in the city, with the traditional Amateur Theater Ensemble (CAT) as the stage of the performances. And for those who do not return home without carrying a souvenir in their luggage, it is indispensable to know the local handicraft shops and fairs. Emotion and beautiful images will not lack those who visit this city with diversified options of leisure, culture and faith.

In the rural area of the city what doesn't lack are leisure options. Hiking lovers can enjoy wildlife while exercising on nature trails. For those who like to feel the wind in their faces and are not fear of heights, it is possible to find places that are suitable for paragliding flights.

In the area of business, Jacarezinho has two traditional fairs. GeniusCon aims to foster innovation and technology in the region, with activities focused on science, technology and entrepreneurship. The International Coffee Fair of the Northern Pioneer of Paraná - Ficafé, takes place in October, and its attractions aim to promote and present the production of specialty coffees produced in the region. It is also worth mentioning the city's Street Carnival, with the Samba Schools parade and the Texas Ball which, since 1958, has animated participants in the best old western style.

Jacarezinho is one of the cities that integrates the Rosário Route, a project that aims to leverage tourism and development of the regions of Paraná in the North and Campos Gerais. In addition to the beauties in architecture and religious works, the temples of the city are great options for those looking for a spiritual retreat.

HAVE FUN AT JACARÉ'S SALTINHO
Cradle of the Jacaré River waterfall, the tourist who visits the local can test the skills with the windlass in the areas intended for fishing. You can still cool off in the water, which has shallow depth. Saltinho do Jacaré is on the rural road near the Monjolinho neighborhood, 20 km from the center of Jacarezinho.

IN THE FARM ROUTINE
Rest in the middle of nature, ride, refresh yourself in the waterfall, savor great dishes. These are some of the many attractions available to the guest at Pousada Laranjal, located 20 km from the center of Jacarezinho. For visitors who want a closer contact with the animals on the farm, it is also possible to help lead the cattle in the milking, besides taking care of the goats, calves and foals. 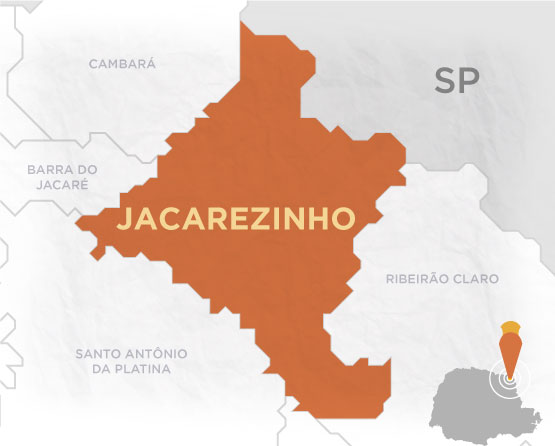 Immaculate Conception Cathedral
Declared by the Historic Patrimony of the State, the majestic cathedral charms the visitors with its frescoes and murals that arrive to 15 meters of height. In the art of Eugenio de Proença Sigaud, the history of the city mixes with Biblical references such as the Old Testament olive trees which were replaced by pine trees, coffee trees and sugar cane, in order to portray the local crops. There are 600 m² of paintings of pure history, faith and beauty.

Shrine of the Queen Mother and Schoenstatt Winner
The city of Jacarezinho is a landmark in the history of the Schoenstatt International Apostolic Movement because it was the first city in Brazil to receive the 12 Sisters of Mary. Coming from Germany, the missionaries arrived in the city on June 12, 1935, and planted the seed to spread the message of the mother of Jesus Christ on Brazilian soil. After 73 years since the arrival of the pioneers, the sanctuary was inaugurated in 2008, next to the monument Cross and the Brick. These symbols represent the sending of the Marian teachings (cross) and the relation with the original shrine (brick), located in the German city of Vallendar. A place of spiritual renewal and strengthening.

Sanctuary of Our Lady of Guadalupe
Dedicated to Our Lady of Guadalupe, Patroness of Latin America, the sanctuary was inaugurated in 2000 in commemoration of various religious events, such as the 500 years of Catholic evangelization in Brazil. In its stained-glass windows, images symbolize the evangelization of the Indians, as well as the ceiling of the temple, which refers to the cover of a hollow, typical indigenous dwelling. The interior and exterior religious icons represent the broad culture of the diocese of Jacarezinho, such as the sculptures of the doors, hand carved by city workers. It is worth knowing all symbols of this sanctuary.

It is possible to reach Jacarezinho by the BR-369 and BR-153 highways. Another option is Londrina Airport, 150 km away. The municipality is 380 km from Curitiba and São Paulo.

If you are too hungry do not forget to try the Pachola, a tasty recipe of rice with chicken and vegetables, typical dish of the city similar to a risotto. The city still has several options of restaurants, pizzerias and snack bars. The choperias are also great places to relax with friends.