Lapa is one of the oldest cities in Paraná, 70 km from the capital, in the Campos Gerais region. The municipality, which reveals Brazil in the nineteenth century, had its origin with the past of the tropeiros in the region, which were very important for the economy of the country. Even before the construction of highways and railways, besides being transporters, they were merchants. This time was registered by Poty Lazzaroto with the Monument to the Tropeiro, in the entrance mural of the city.

In the Historical Center, there are evidences in the streets and residences of the neighborhood that remind an episode of the Brazilian political trajectory: the Cerco da Lapa. It was a battle which had an important mission in the history of Brazil and had lasted 26 days. Lapa was responsible for the end of the Federalist Revolution in 1894. The mission of Lapas’ people was to stop the advance of the Maragatos southerners, commanded by General Gumercindo Saraiva, who had already dominated Curitiba. The local army was mostly constituted by civilians. The organization of the woodpeckers guaranteed the victory over the Maragatos.

The main economic activity of Lapa is farming. Approximately 60% of the population lives in urban areas. Because of the culture and breathtaking landscapes, historical, religious and rural tourism have great potential. The municipality is recognized for architectural preservation, which serves as a scenario returning to the past. It's a quiet town full of stories to tell. surprise yourself!

Lapa has attractions for all tastes: history, architecture, nature and gastronomy.

In the Monge State Park, which is a 10-minute drive from the city center, large green area with waterfalls and trails leading to the Monke Grotto, a place of religious pilgrimage.

CINEMA FESTIVAL
The city's architecture is used as the setting for TV commercials, documentaries and films. It is inspirational for the annual editions of the Lapa Film Festival, which every year surprises by the importance in the scenario of the Seventh National Art. The event takes place in November.

Leaving Curitiba, the best way to get to Lapa is by BR-476, the Rodovia do Xisto, by Araucária. It is 65 km from the capital. There is a toll on the highway.

Hosting options is not lacking in the city! It has renowned SPA, hotels and inns for all types of tastes. 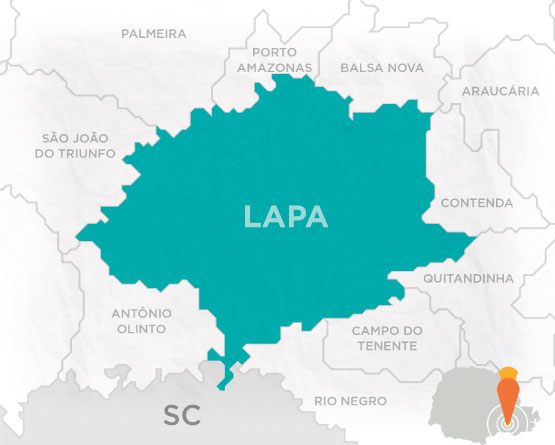 Cave of the Monk
According to the told story, the monk, João Maria D'Agostinis, lived in a grotto in the mountains with rock formations. The place became a pilgrimage point with mystical value. "Saint John Mary", as he was known, used to study the plants of the region, medically treating the sick, making prophecies and prayers. Therefore, the local, which is part of the Monge State Park, is sought after by people who seek healing for their evils. Besides João Maria, registries indicate that two monks frequented the region and made predictions. The Legend says that the three made predictions. There is also someone who says that sees the image of a saint in the crevice in the stone that served as a shelter for the monk John Mary - known as Stone Partida.

Theatro São João
The space, which has a yellow facade and an interior made of wood, works to this day. The Theater received a visit from Pope Dom Pedro II and Empress Thereza Christina, who were in Lapa in 1880.

Historical Museum
The museum is next to São João Theater. There are engravings and rare pieces that remind the struggle of the Cerco Lapa, such as General Carneiro's personal objects, swords, republican clothes, etc.

Santo Antônio’s Church
The construction of the church is typical of the colonial period, with the characteristic facade of the time, completed in 1784. The Church of Santo Antônio is part of the National Artistic and Historical Heritage.

Casa da Memória (Memory's house)
It is also known as Casa dos Cavalinhos. Built in 1888, the space houses rare books brought by lapeanos who studied outside Brazil. The house is decorated with clouds on the walls and winged horses that adorn the facade.

Panteon dos Heroes
Cannons and imposing facade indicate the Heroes' Pantheon. The local houses the remains of heroes lapeanos , who died in the Cerco da Lapa.

Casa Lacerda
One of the main points of visitation is Casa Lacerda, federal museum, located in front of the Panteon dos Heroes. For those who want to know how it was the home of a wealthy family of the XIX Century, it is a great option. The furniture and decoration of all the rooms are original from the time.

Museu das Armas (Weapons Museum)
It was the first prison of the city, which houses the City Council and was transformed into a museum. There, there are ammunition, cannons, rifles, bullets, collections of equipment used in the Federalist Revolution and other wars.

San Benedito Sanctuary
It is the largest sanctuary dedicated to the saint in the whole world. It has a wonderful architecture. Worth knowing.