A CITY WITH RECOGNIZED POTENTIAL

Located in the North of the State, Londrina was founded in 1934. It received immigrants of different nationalities, mainly Italians, Portuguese, Japanese, Germans and Arabs. It is the largest city in the Interior of Paraná, with 500 thousand inhabitants. This important economic center stands out for agricultural production. The purple soil, extremely fertile, was decisive for the foundation and growth of the region. Londrina is a modern, dynamic and developed city, with a look to the future, without forgetting its roots and the environment. Therefore, some of the best walks and postcards are surrounded by the green of the Atlantic Forest.

HISTORICAL MUSEUM OF LONDRINA
The Historical Museum of Londrina is a supplementary organ of the State University of Londrina (UEL), located in the center of the city. It occupies the building of the old railway station. It was built in 1952 by the architect João Batista Vilanova Artigas and was used as the city's bus terminal until 1988.

IGAPÓ LAKE
Its name in Tupi-Guarani means "transfer of rivers". It is one of the most beautiful areas of leisure in the city. The landscaping is Burle Marx's project and includes a garden with 187 species of native plants, which form a pleasant setting at 4500 m. of extension.

METROPOLITAN CATHEDRAL
The building of the Cathedral went through three major transformations in the original design, still in wood, of 1934. The chalet format stands out among the architecture and the building can be seen from several points of Londrina. The structure in stone, cement, steel and aluminum gains lightness with the enormous stained glass of the facade. The green areas on the two sides frame the building, which is one of the largest references of the city. 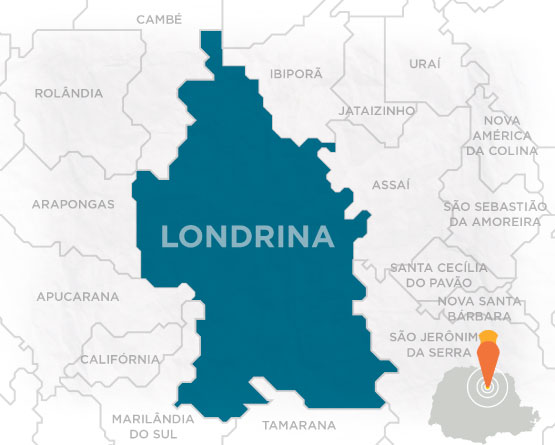 Arthur Thomas Park
Arthur Thomas Park is an urban forest located near the central region of Londrina. The park has a total area of 85.47 hectares, where before was installed the first hydroelectric power plant in the city. It was created in 1975 and opened to visitors from 1987. It has several species of animals and vegetables.

Botanical Garden of Londrina
The Botanical Garden is one of the most beautiful tourist spots in Londrina and one of the largest research and conservation units of native and exotic species of Paraná. Rare, endangered and important wildlife species for restoration and rehabilitation of ecosystems are found there. Lakes, greenhouses, trails and hiking trails are some of the attractions of the garden.

Municipal Forest Marechal Cândido Rondon
The Municipal Forest Marechal Cândido Rondon lies in the central part of the city, between Rio de Janeiro and São Paulo avenues, next to the Metropolitan Cathedral. This one, which is one of the most remembered tourist spots in Londrina, consists of two blocks, with species remaining from the primitive vegetation cover.

Luigi Borghesi Leisure Area – Zerão
The Luigi Borghesi Leisure Area is called "Zerão" due to the size of its 1050-meter-long runway - it looks like a big zero. In the inner area of this lane, there is a large lawn, sports courts and playground. There, artistic, cultural and sports manifestations of the community, presentations of the Londrina International Festival (FILO) and the Music Festival of Londrina, as well as several aerobic gymnastics championships are held.

Old Bus Station - Museum of Art of Londrina
Designed by the architects João Batista Vilanova Artigas and Carlos Cascaldi, the building housed the Londrina Bus Station. The seven vaults of the roof made up the garage of the buses. Since 1993, the site is home to the Londrina Museum of Art.

Promenade of Paraná Av.
Designed by the architect Jaime Lerner, the boardwalk is all done in Portuguese mosaic. It is between the streets Mayor Hugo Cabral and Minas Gerais. Since its construction in the 1970s, the boardwalk is one of Londrina's main trade points. Since 2010, pavement and lighting have undergone a modernization process.

Cine Teatro Universitário Ouro Verde
It was one of the first examples of modernist architecture in the city. Opened in 1952, it had one of the state's most luxurious movie theaters, with a capacity for 1500 people. Since 1978, it has been administered by the State University of Londrina and is listed by the Cultural and Historical Patrimony of Paraná. In 2012, the building was partially destroyed in a fire. Today, it is restored, with all the original features kept in the recovery project.

Londrina Airport is one of the most important in the South of Brazil and serves part of the State of Paraná. It operates with cabotage flights to several important destinations in the country. The airport is located 3 km from the center of Londrina

Londrina has a wide hotel network, for several publics, including hotels of high standard.

Due to its diverse ethnic constitution, Londrina has many gastronomic options, with restaurants, bars and confectionery, where you can find Japanese, Arab, boteco (bar), regional food, etc.