With approximately 420 thousand inhabitants, Maringá is one of the few cities in Brazil that can reconcile economic growth and environmental preservation. Planned, with wide avenues, wide green area and excellent level of quality of life, the city enchants who visits it.

The mixture of the Japanese, German, Arab, Portuguese and Italian colonies transformed the city into a plurality of cultures, highlighting their folklore and traditions. If you do not know Maringá yet, do not waste any more time!

One of the focus of the city is wooded. With innovative urbanism, Maringá has at least one tree for every four inhabitants. A spectacle of contemplation of nature

In addition to being very wooded, the city has several parks and woods, with lots of green area and rich in flora and fauna.

Because it is a city in which the ethnic groups' mix, Maringá has many clubs and cultural centers of diverse peoples, who keep their traditions alive.

PARTIES OF STATES AND NATIONS
Representing the culture of several national and international regions, the event, which takes place in October, it is an opportunity for travelers who want to know and experiment multicultural cuisine and crafts.

AGROINDUSTRY'S SHOW
Held in May, Expoingá is na agricultural, industrial and omercial fair that attracts hundreds of thousands of people with musical shows, rodeo and, of course, promotes business tourism. 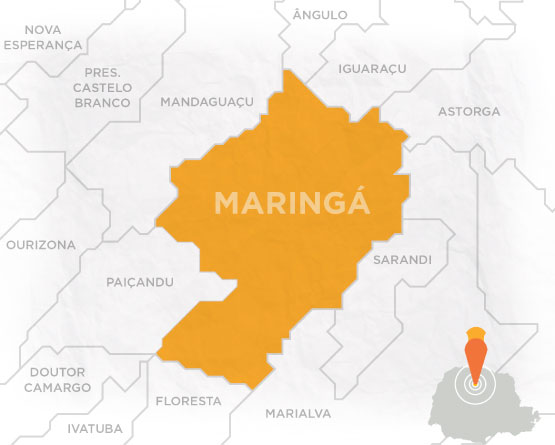 Cathedral Basilica Minor Our Lady of Glory
Inspired by the Soviet satellite Sputnik, the cathedral is represented by a conical structure that points to the sky. It is currently the 10th highest religious monument in the world and the first in South America.

UniCesumar Museum
The local is formed by the House of the Pioneer, the Interactive Museum and the Space of the Automobile. The goal is to show and preserve the history of the city and its pioneers.

Parque Alfredo Nyffeller
Created to revitalize a degraded area and protect the source of the Morangueiro stream, the park has an artificial lake, two Swiss soccer fields, a children's playground, a gazebo and a jogging trail.

Maringá has an airport with regular commercial flights. It is also possible to get the city from Curitiba by highway BR-376.

As a planned and well-structured city, Maringá offers good lodging options for travelers, between hotels and hostels, mostly in the central area. But there are also more economical options in the residential areas.

The gastronomy of the city is quite diverse. In addition to excellent restaurants of the best gastronomy, the "Cachorrão" is a hot pressed dog which has the face of Maringá. What calls the most attention in the preparation of the snack is creativity, because, in addition to sausages, you can still take sausages and ground meat. What matters is to ensure the satisfaction of those who experiment it.