COME TO KNOW THE
CITY OF ORCHIDS

It is impossible not to be enchanted by the colors and flavors of Maripá. Internationally known as the City of Orchids, it also built its image through cuisine and tractors. That's right, in addition to the beauty of the flowers and the irresistible roast fish, in Maripá is located the first Tractoródromo of Brazil, scene of the traditional Traccadão de Tratores. Those who enter the city through the PR-182 can observe these three symbols in the Tourist Portal.

Together with fish farming and orchid production, the city's economy strengthens the industrial, commercial and agricultural sectors, with the creation of chicken and pigs, besides the planting of soybeans, corn and cassava.

The estimated population, according to IBGE, is 5,624 inhabitants. The name of the municipality originates from the abbreviation of Madeireira Rio Paraná, an Anglo-Argentina company that, around 1905, began the exploration of wood and extraction of yerba mate in the region.

As for the title "Cidade das Orquídeas", it all began with Professor Zíria Dalchiavon, who in 1993 had the idea of planting orchids in the city's trees, in preparation for the 7 September parade. Over the years, cultivation became popular. In 1997, the city council designated Maripá as the City of Orchids. They are beauties that can be contemplated by every municipality.

Who are looking for tranquility and peace of life in the countryside, in Maripá there are several properties that receive visitors with open doors and table full. Throughout the year, it is possible to get to know some of the local culture, taste the colonial dishes and, of course, get to know the beautiful orchids.

By scheduling, the tourist can visit the properties to know the weirs and techniques used in fish farming. In constant development, the activity is one of the most important for the municipality.

EMOTION ON FOUR WHEELS
If you are in the city in the month of April, it is worth checking out at the Tractor Ride. In this sporting competition, modified tractors travel a distance of 201 meters in less than 9 seconds. It's pure adrenaline.

BE SURE TO OBSERVE THE TREES
In the public streets, the orchids planted in the trunks of the trees are worthy of the title of the city. The flowers of the species Dendrobium predominate, which bloom in August, the month in which the Orchid and Fish Festival takes place.

THE BEAUTY OF LIGHTS AND ORCHIDS
In December the party atmosphere takes over the city, highlighting the lighting and Christmas decoration that further enhances Orchid Square. 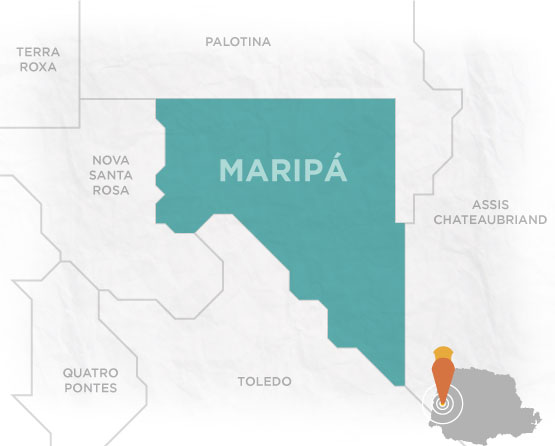 Events Center and Tratoródromo
In addition to the track built especially for tractors racing, the Events Center is composed of gastronomic pavilion, exhibition pavilion and external exhibition area. In the season of competitions the place emanates adrenaline; in the Festival of Orchids and Fish, the colors and flavors.​​​​​

Orchid Square and Craftsman's House
With beautiful orchids in the trunks of the trees, the square is a great place to rest. Enjoy and also visit the House the Artisan, there you can buy colonial products and buy souvenirs to give friends and family.​​​​​​

Lani Bento Maria Municipal Park
Around the lake, the whole family can enjoy the ample space with playground and outdoor gym.

Located in the western part of the state, 600 km from Curitiba, Maripá borders with Palotina, Nova Santa Rosa, Assis Chateaubriand and Toledo. It is possible to arrive to the city by the highways PR-491 and PR-182.

To restore the energy, the city has a simple and cozy hotel, located in the district of Candeia. There you can relax by the pool as well as work out on the trail.

Who likes a beautiful roasted fish could not let to taste the Boneless Tilapia, stuffed and roasted on the grill. In addition to this typical dish, in the festivities in the districts of Independiente and Candeia, it is possible to taste the traditional Ribeiro Fogão de Chão and the Chicken Boned and Stuffed.