NOVA AURORA, A LAND
OF OPPORTUNITIES

Nova Aurora is a municipality belonging to the Metropolitan Region of Cascavel, located almost 570 km from Curitiba, with a population of 10,650 inhabitants.

The exploration of the area where New Aurora began in the 1940s. The fertile lands attracted the first inhabitants, who began the formation of the village. Agriculture and the services sector correspond to the main sources of income of the municipality.

The creativity combined with the vision of entrepreneurship has led to the investment of producers in non-agricultural activities, such as rural tourism. The city has a lot to offer. They are landscapes of exuberant beauties, walks in rural areas, trails and much more!

Created in 2005, the tourist route of Nova Aurora is known as The Sun Circuit. With 16 properties, forming a touristic route of beautiful landscapes, there are trails, rural museum, waterfalls, etc. The Circuit is a reference for rural tourism in Paraná.

For those who like to fish, Paid Fishpond Sandri is a leisure area for the whole family. The restaurant also has a snack bar and restaurant.

REFERENCE
New Aurora is considered the Capital of Tilapia. The title was won in 2017.

CURIOSITY
The name of the city was taken from the exclamation of Father Luiz Bernardes, from the parish of Corbélia, who in the early 50s prayed mass under a leafy tree in the new town of New Aurora. The religious exalted the hope of new life for that community, the Nova Aurora which would come to the pioneers' wishes. In 1959 the town of Nova Aurora had other nominations, such as Alto Iguaçuzinho, Tapejara Crossroad and Fazenda Roda de Carro. 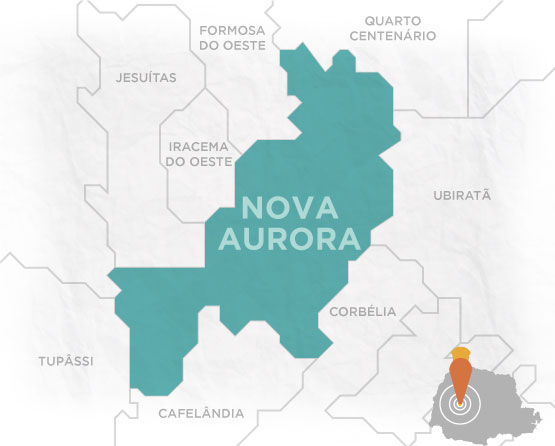 Recanto Roecker is a family site located in the Alto Alegre Community. There corn, wheat and soy are grown there. However, there are also ecological trails, rural museum and orchard, as well as beautiful landscapes. The dedication and creativity contribute to make the place a reference for rural tourism in the region.

The Cooperative of the Family Agroindustries of the West of Paraná is a place where there are products of family agriculture and rural handicrafts for sale.

The typical dish of the city is the tilapia, in its most varied options: roasted, fried and the sauce. Traditionally, the Tilapia Festival takes place in September, the month of New Aurora's birthday.