THE CRADLE OF PARANAENSE CIVILIZATION

Recognized as the place where the settlement of Paraná began, Paranaguá is the largest city on the coast of the State, with an estimated population of 153 thousand inhabitants. Famous for having the largest grain export port in Latin America, the city has countless natural beauties and lots of history.

Visiting the city is to know the Isle of Honey, with its beaches, its lighthouse and its Fortress. It is to visit the Sanctuary of Our Lady of Rocio, the patron saint of Paraná. It is a boat ride through the Bay of Paranaguá. It is also impossible not to taste the barreado, the fish pirão and the mullet, jewels of the local cuisine.

Knowing Paranaguá is to dance a fandango, to walk through the historical center and to enchant with the multicolored mansions or to explore its area of Atlantic Forest. After all, it's been almost four hundred years since Paranaguá graces itself to receive you.

Paranaguá has many islands, focus attention on Ilha do Mel, Valadares, Cotinga and Ponta do Ubá.

The metropolitan area of the city has parks that stand out for the fauna and flora of the Atlantic Forest, such as the Palmito State Forest, as well as the Quintilha Waterfall.

The Palmito State Forest is full of natural beauties. The place has a museum, ecological trails, experimental kitchen, nurseries of seedlings, anchorage for boats, snack bar and craft shop.

The beautiful Cachoeira Quintilha, formed by a geographical accident of approximately 40 meters in the Bejatuba river, has a restaurant and Pesque-pague (fish and pay), which operates on weekends. The owners of the areas charge an entrance fee. It is a great trip to enjoy with family and friends.

For those who enjoy culture, the center of the city has countless mansions, churches and museums, which are a real dip in the history of the city.

KNOW THE GREATEST GASTRONOMIC FEAST OF PARANAGUÁ
The National Feast of Mullet always takes place between the end of June and the beginning of July.

RELIGIOUS TOURISM
One of the most traditional religious celebrations in the State, the feast in praise of Our Lady of Rocio takes place in November and is composed of novenas, maritime and motorized procession and church mass. 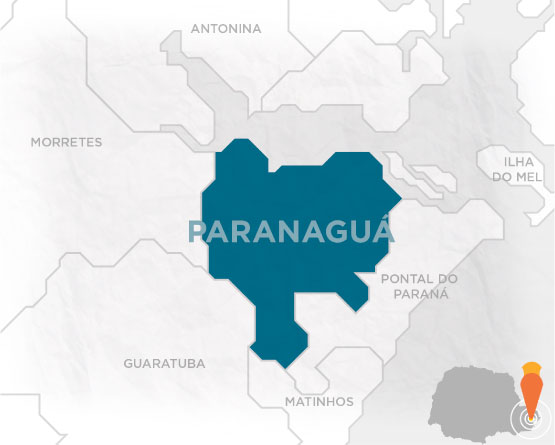 Aquarius of Paranaguá
Divided into three floors, the Aquarium of Paranaguá has animals of several species, mostly animals from the coast of Paraná. However, there are also exotic animals, such as the bamboo shark, species of stingrays and even an alligator.

Cathedral of Our Lady of the Holy Rosary
Built in 1578, it is the oldest church in Paranaguá. In colonial style, the cathedral was built by slaves and freedmen. It was registered by the Historical and Artistic Patrimony of Paraná in 1967.

State Sanctuary of Our Lady of Rocio
Built at the beginning of the 20th century, on the shores of Paranaguá Bay, the site is a Catholic temple dedicated to Nossa Senhora do Rocio, the patron saint of Paraná.

Paranaguá is 91 km from Curitiba, along highway BR-277.

The city of Paranaguá has several hotels and inns.

Being a seaside town, the seafood is a delicacy of the Paranaguá cuisine: diverse fish, especially mullet and hake, dried fish with banana, shrimp, crab, crab, oysters and seafood.

In addition to these delights, there is also the lambe-lick rice and the barreado, a dish typical of the coast of Paraná, prepared in a pan "barreada", that is, closed with pirão and / or flour, which avoids the leakage of the steam. Meat and other seasonings should be cooked from 12 to 15 hours.