THE CITY WHICH BREATHES INNOVATION

Pato Branco is an example that preservation of nature and technological investment can go hand in hand. In addition to the diverse leisure options in green areas, the municipality stands out as a regional education center, with more than 90 degree courses and about 100 software, appliance and electronic components industries. This partnership between universities and the market allowed to be installed in the city a Technological Park, recognized nationally.

Located in the southwest of the state, Pato Branco borders the municipalities of Bom Sucesso do Sul, Clevelândia, Coronel Vivida, Honório Serpa, Itapejara D'Oeste, Mariópolis, Renascença and Vitorino. With an estimated population of 81,893 inhabitants, according to IBGE, the city also carries traces of Italian colonization.

Modern structures and technological inclusion has inserted Pato Branco into the Network of Digital Cities. An example of such innovations is the Technology Tree installed in Presidente Vargas Square, which provides free Wi-Fi signal and serves as a recharge point for cell phones. So sharing the beauties of the city became even easier.

In the city there are several spaces for those who want to exercise. Trails, bike paths, swimming pools, soccer fields are some of these options.

With several areas of native forest, the municipality provides the contact of visitors with nature, in addition to carrying out activities of awareness and incentive to preservation.

In order to stimulate entrepreneurship and technological updating, during the year fairs are held that attract investors and promote local products and services. Science, Technology and Innovation Fair - INVENTUM; House and Construction; Exporural and Expopato are some of these events.

OUTSTANDING IN SPORTS
Champion in 2018 of the National Futsal League and the Brazilian Futsal Cup, Pato Futsal is one of the most traditional and successful clubs in the country, elected by the Umbro Futsal Awards 2018 as the 5th best futsal club in the world. The Pato Basquete team plays the Gold League of the sport, and each game gains notoriety, thus seeking a place in the national league.

THE BIGGEST CHRISTMAS PARADE IN PARANÁ
Between decorations and lights, at the end of the year the decorations spread throughout the city, bringing the locals and tourists all the magic of Christmas. The municipality receives thousands of people at this time who, in addition to being enchanted by the enlightened environments, visit the traditional Santa's House and prestige the parade with its allegories, songs and characters that go back to Christmas. Surely they are scenarios that yield great photographs. 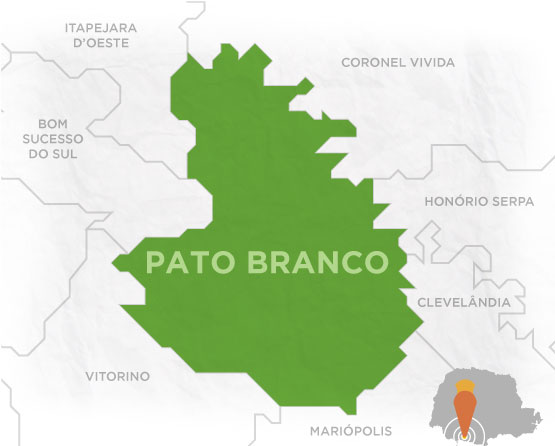 With 107 hectares of native forest the park is a great option for the tourist who wishes to relax. If the idea is to exercise in the middle of nature, the place still has hiking trails, trails and bike paths. Restaurant, parking and other facilities guarantee the comfort of the visitor.

Whether for leisure or practicing physical activities, the structure with more than 1300 m² pleases all ages. Coexistence center, soccer field, playground and health academy are some of the attractions available in the space. In order to encourage healthy habits people, on-site sporting workshops and activities such as water aerobics and swimming are offered.

Located 439 km from the capital, one can arrive at the city by the BR-158, PR-493 and PR-280 highways. The city has a municipal airport with regular weekly flights, departing from Curitiba.

Recognized for its well-being, Pato Branco has a hotel network that is organized and structured to meet visitors. The high standard hotels are located in prime areas and in galpas, with easy access to the car and public transport.

If you get starving, the city offers excellent choices of restaurants, snack bars and steakhouses. And of course, the tourist who visit Pato Braco cannot let to try the X-Polenta, typical dish of the city with varied fillings, but always replacing the bread with polenta.