CITY WITH NATURAL
ATTRACTIONS AND RESPECT
FOR THE ENVIRONMENT

Located in the second Planalto Paranaense, Ponta Grossa is endowed with a privileged geographical position due to the various possibilities of access to all the regions of the State. The name is of geographical origin and, it has reference to a hill of great diameter covered by an island of bush. This hill could be seen from a long distance by all who traveled the region.

The city has a series of natural attractions and reconciles its growth with respect for the environment. with roots connected to tropeirismo Ponta Grossa has traces of its history in architecture, railroads and landmarks of a region accustomed to welcoming migrants and immigrants, forming a plural local culture that can be seen in typical festivals, culinary and other manifestations. After the construction of the Railroad, the city became a large commercial, cultural and social center. Also came Ukrainian, German, Polish, Italian, Russian, Syrian and Lebanese immigrants who contributed to the development of the city.

Its main focus in the tourism are the State Park of Vila Velha, an area of sandstone millennial, and the traditional MunchenFest, the only party of the Country with the seal of the Consulate of South Germany of Brazil. The festival brings together culinary, dances and traditional games in celebration of German immigrants and their contribution to the formation of the municipality.

The dam of the Alagados is the ideal place for those who look for an alternative of leisure and to have contact with the nature. Those who enjoy sports, there, it is possible to practice rowing, windsurfing, fishing, swimming, etc.

Surrounded by formations of sandstone and native forest, the Mariquinha Waterfall is 30 meters high and is a few kilometers from the city center. In addition to the crystal clear water and the view, the location is ideal for camping, hiking and hiking.

With many waterfalls, the São Jorge Canyon and Waterfall have a waterfall of 30 meters high, as well as rock walls ideal for rappel practice.

NATIONAL FESTIVAL OF THEATER AMADOR (FENATA)
Held since 1973, Fenata is one of the oldest theater festivals in the country. With more than 1,500 participating groups throughout its history, it serves the adult and children's categories, involving the whole city of Ponta Grossa and fomenting the development and access to the theater culture in the municipality.

MUNCHENFEST
Main gastronomic and cultural event of the municipality. MunchenFest is the only party with the support of the German Consulate in Southern Brazil. Promoted almost 30 years ago, the annual festival gives visitors the chance to meet German food and cultures. 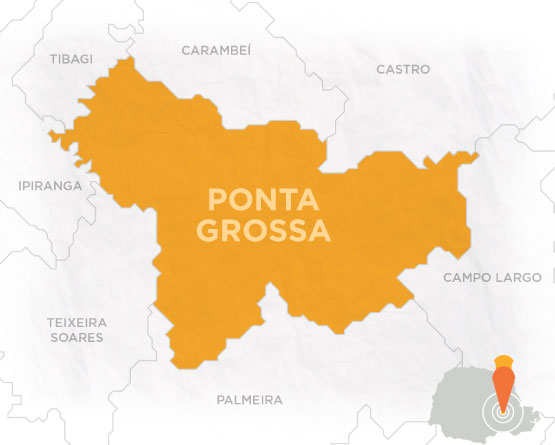 Vila Velha State Park
Created in 1953, Vila Velha Park has an area of ​​over 3,000 hectares. The main attractions are the Arenitos, rock formations of varied forms, the best known is "The Cup". There is also Furnas - large wells with lush vegetation and water (underground sheet), and the Lagoa Dourada, which has this name due to the coloration that it presents when it reflects the sunlight.

Buraco do Padre
The name is connected to the history of the Jesuit priests who meditated on the local. It is a kind of underground amphitheater with a waterfall of 30 meters of height, formed by the Broken River Perna. To get there, it is necessary to walk a 1 km trail. Due to accessibility, wheelchair users and people with limited mobility can walk the main trail.

Alagados
The artificial lake was created in the 40's when the Pitangui River was dammed. Located 20 km from the city, it is the biggest responsible for water supply in the city. The place is ideal for contact with nature, being a leisure alternative. There, you can practice rowing, windsurfing, fishing, swimming, etc.

Igreja Matriz - Catedral de Santana
It is in the Central region of Ponta Grossa. The project was started in 1978 replacing the old building. Stained glass and architecture provide a different experience and privileged view of the city.

Equipped with a large road-rail junction, Ponta Grossa is close to Curitiba. With several accesses, the main ones being the BR-376 and BR-277, PR-151 and Transbrasiliana highways. There is Sant'Ana Airport which receives commercial flights, located 10 km from the city.

Ponta Grossa has a large hotel chain. Most of the developments are located in or near the Center.

Ponta Grossa has a varied gastronomic sector, with bars and restaurants of various cuisines, great franchises and establishments that offer typical dishes. The official dish of the city is "Alcatra na Pedra". The municipality also emerges as one of the great centers of artisan beer production in the South of the Country.