MEETING OF CULTURES
AND FLAVORS

Located in the North Central region Paranaense, Rolândia was a homage of the German pioneers to Roland, the legendary hero of the Middle Ages, who fought with the emperor Charlemagne for freedom and justice, since the ideals of the colonizers were the same.

The local culture is marked by German, Japanese and Italian ethnicities. The municipality boasted the title of Coffee Queen until 1975, the year in which "black frost" eradicated almost all coffee plantations. After the episode, other crops were implemented, with emphasis on soybean, corn, wheat, sugarcane and orange. In 2017, the city became part of the Craft Beer Route of the State of Paraná.

With the population estimated at 65,757 inhabitants, according to the IBGE, the city has several attractions to be appreciated. They have lush landscapes, tourism in rural areas, tradition and lots of history to tell! Do not miss it!

Beautiful landscapes can be admired by visiting rural roads, such as Estrada São Rafael, where the Chapel and the São Rafael Cemetery are located. It is also possible to appreciate the buildings in pink peroba and noble woods, most built between the 1930s and 1940s. They are very sought after scenarios for the taking of photos and filming, including cinematographic productions.

The city stands out regionally for its outdoor activities, such as the Rolândia Ecological Walk, the Saracura Trail and the San José Cycling Tour.

LEARNING WITH THE ORIGINS
Fazenda Bimini, has a vast historical collection, and hosts groups with prior scheduling, performing various activities focused on environmental and cultural education, free of charge. There is also an infinite number of possibilities for the development of tourism in rural areas, whether in small family farms or in reference places in milk production, fingerlings, coffee growing and other crops, including the production of organic .

FESTIVALS AND TRADITIONS
The events are closely connected to the preservation of traditions and customs, connected to the main ethnic groups that make up the population, with emphasis on the German and Japanese ethnic groups, with their dances and typical foods, music and unique clothing. Among the traditional festivities of the city are the Erntedankfest (Harvest Thanksgiving), Maifest, Spring Colonial Café, Buddhist Temple Quermesse, Oktoberfest, Christmas of Rolland and the Rolling Kart Festival. 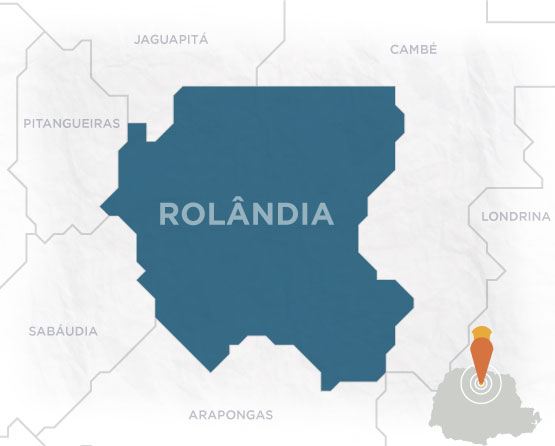 Igreja Matriz, São José Parish
In 1942, the Parish of Rolândia was created and Father José Herions was named the first official parish priest of the city. In 1948, the construction of the present Church began, which was only inaugurated in 1955, still unfinished. The church's collection includes frescoes from 1966, paintings on canvases with biblical representations, among them a 17th-century canvas, 14 carved wooden pictures representing the Via Sacra, stained glass windows from 1957, among other works of art.

Museu de Cera Amigos de Deus e Museu Sacro
Located in the church tower, the Wax Museum has in its collection 20 pieces made by the artist Arlindo Armacollo, inspired by world figures such as Ayrton Senna, Papa Francisco, Hebe Camargo, Mother Teresa of Calcutta and Marilyn Monroe. The Sacred Museum, founded in 1987, has one of the few collections of religious vestments and liturgical objects in the region, such as diaries, missals and works of art.

Estrada São Rafael
One of the most beautiful rural roads in the municipality of Rolândia, where there is also the first Spa in the Northern region of Paraná, a fishing and properties that produce from coffee, soy and corn, to ornamental plants, strawberry, lychee, cheeses, among others.

Cemitério São Rafael
The first grave was made in 1940. There are many trees on the site, and the vegetation on the tombs resembles a park or garden. The fish carved on the chapel and cemetery plates symbolize the cure of diseases.

Museu da Imigração e Colonização Japonesa do Paraná
In the museum it is possible to appreciate equipment or pieces related to Japanese agriculture, besides paintings, clothes and objects of culture, education and others that tell the history of Japanese immigration in the North of Paraná, besides a beautiful garden, with many palms, cherry trees and araucarias, and the house of the settlers, who portray the dwelling of the pioneer families.

Fazenda Bimini
Besides the house with architecture from the end of the 1930s, the farm also has the old granary and the coffee farm, where educational, recreational and cultural activities are carried out. Inside the granary are several old objects, works of art, drawings made by locals and children who visited the farm. There is also a space dedicated to indigenous culture, where various objects and photos are displayed, and the Cafe Massuci Museum, with works by the rolandiense artist Edson Massuci and objects that refer to the history of coffee.

Rolândia is in a privileged position, where the main accesses are the BR-369 and PR-170, to 394 km of the paranaense capital. The nearest airport is in the city of Londrina, 27 km away.

The city has two hotels and a spa, however, it has the facility of being 25 km from Londrina, which has a large hotel infrastructure.

With great gastronomic variety, stands out the German, Italian and Minas Gerais cuisine. Some restaurants in the city have become tourist attractions because they bring many visitors interested in enjoying dishes different from the usual, as is the case of Eisbein (pork knee), typical dish of Germany. It is also possible to taste traditional sausages, fillet à parmegiana, pork in the pan, cucas, sausages from the district of São Martinho, among others.