On the banks of the Iguaçu River, the city that was of great commercial importance in the period of steam navigation, today boasts beautiful Polish cultural references, besides being distinguished in the planting of yerba mate and industrial exploitation of the shale.

The agricultural production and about 100 industries in the most diverse branches move the economy of the city. The industry stands out in this environment for having 50% of its forest area and native herbs still preserved, being the city one of the largest producers of Paraná.

According to the IBGE, the estimated population is 45,806 people. The municipality limits with the cities of Antonio Olinto, São João do Triunfo, Mallet, Paulo Frontin, Rebouças and Rio Azul, in the state of Paraná; and with Canoinhas and Três Barras, in the state of Santa Catarina.

It is worth walking the streets of the city and getting to know the mansions amidst the modern buildings. In them is present the Polish architecture, where stands out the predominance of wood and the details of the lambrequins.

Also with traces of Polish immigrants, visiting the chapels and churches of the city is to return and get to know a little of the local culture.

TRADYCJE POLSKIE
The visitor visiting the city in August will be able to visit the Tradycje Polskie, a festival that lasts the whole month and recalls the Polish traditions. Photographic exhibitions, parades, folk presentations and lots of typical food are some of the attractions that rescue immigrant culture.

EXPOMATE
Among the activities that celebrate the anniversary of the city, in September is held the Expomate, an event that features attractions such as machinery and vehicles exhibition, typical foods, amusement park and musical shows. 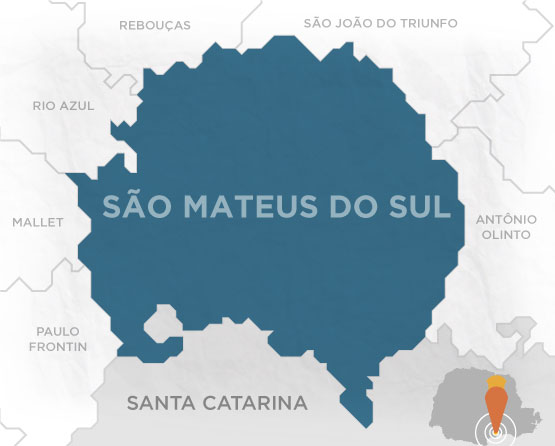 Chimarródromo
Situated in the central area of the city, the place is a meeting point for friends and families to spend pleasant moments taking a good mate.

House of Memory Father Bauer
Installed in the old Parish House, it was inaugurated in 1995 with the aim of preserving the history of the people of São Paulo through the exhibition of objects, documents and photographs. The building is located in Praça São José.

Mother Church Saint Matthew
Standing out from the tower of approximately 70 meters in height and architecture in the Gothic style, the Church Matriz São Mateus is located in the Central Square of the city. Inaugurated in 1964, it has in its interior paintings and paintings brought from the old wooden church built by the Polish immigrants.

Centennial White Water Church
Located in the Água Branca Colony, the church designed in the form of a cross is one of the greatest legacies left by the Polish immigrants. All the wood used in the construction was sawed and hand - planted, having on the main altar the inscription in Polish "Wr. 1900 Jezus Chrystus, Bóg - Czlowiek Zyje, Króluje, Panuje", that is, "Since the year 1900 Jesus Christ, God - Man lives, reigns, dominates. " The interior painting was done in 1923 by Ewaldo Ducat, from Irati, already the pictures of the via-sacra and the saints came from Poland and Belgium.

Vapor Pery Monument
Here, visitors can get an idea of how steam was used to transport passengers and cargo on the Iguaçu River. The Vapor Pery, restored between 1996 and 1997, was launched in the waters of Iguaçu in 1912 by the firm Guiblin & Cia, along with two large boats: "Cila" and "Duda". Their engines had a power of 75 horsepower.

Iguaçu River
The river and the bridge are the postcard of the city. Its banks are covered by rich vegetation of várzea, where are diverse species of animals and birds. In the waters live fish of several species, this being a meeting point for fishermen at the weekends.

The hotel chain is located in the central region, very close to the sights of the city.

Brought by immigrants, Polish cuisine is present in the typical dishes of the region, such as Pirogue, Barszcz czerwony and Bigos. Created by the Association of Friends of Herb-mate (IG-Mathe), the sandwich of the tradition of São Mateus is another typical dish of the city. The yerba mate is one of the ingredients of the dough, resulting in the green coloring of the bread.