LAND OF THE SUN WHERE
THE RIVERS CONVERGE

Sertaneja is a typical inland city, with an estimated population of 5,300 people. The main economy comes from agriculture and the municipality is starting to be structured for nautical and rural tourism, in addition to nature sports.

The city has the largest area of the Capivara Dam, 100 km from end to end, formed by two large rivers: Tibagi and Paranapanema. Sertaneja also has the converge of the Tibagi River with the Congonhas River. A perfect place for those who enjoy rivers.

The municipality also houses the Ilha do Sol, a green oasis with many trees that stands in the middle of the dam. All this makes of Sertaneja a great option to know, to invest and to live.

Sertaneja has the Festival Park, where several events are held, among them the traditional "Festa do Peão", with concerts by renowned singers in Brazilian music and the "Encounter of the Farmer", which is a technical, agribusiness, gastronomic event , which features regional shows. There is the Moon Fair, which in addition to concerts and diverse cuisine, counts on the participation of the Japanese colony, as well as the Almoço Sertanejo in June and the Porco no Rolete in November.

Because it is the land where the rivers converge, the aquatic activities stand out, such as: sport fishing, fishing championship, kayak championship, diving and windsurfing.

PARTIES
Maize is the stand out of one of the main festivities in Sertaneja, the Corn Festival, which takes place between June and July. Already in December happens the Festa do Peão, the main one of the city.

BALADA NÁUTICA
For those who like a party that gathers boats, the BoatFest is a must see. The structure has a stage set in the river that receives several bands and DJ's. 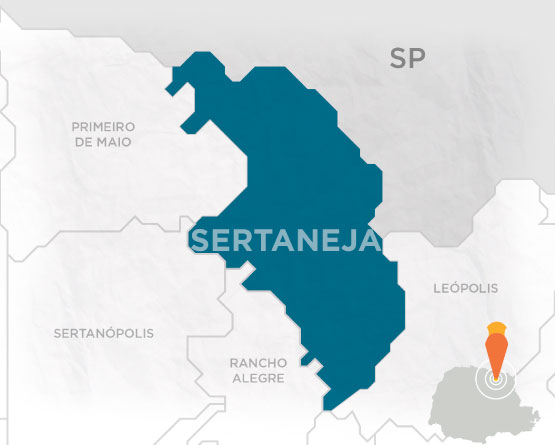 Navigating the Capivara Dam
The city has great tourism potential and is taking the first steps to structure itself as a tourist destination. It has three rivers and the privilege of having the "Tibagi Rivers Diverge with Paranapanema" and "Rio Congonhas with the Tibagi", having on the walk at the end of the afternoon a beautiful spectacle that is the sunset.

The beauty of the countryside
For those who appreciate tranquility, there are rural properties that offer walks, trails, gastronomy and lodging.

Eastern landscape
Even though it does not have a very large urban area, Sertaneja has three Japanese colonies, including Praça dos Imigrantes, a place in honor of Japanese culture.

The distance between Curitiba and Sertaneja is 430 km, following the BR-376. The city is 80 km from Londrina and borders the state of São Paulo.

Nowadays, the city has a hotel and a hostel, but is being structured to increase its capacity of lodging to receive even better the tourists.

There is no typical Sertaneja dish. The options are quite varied and the cuisine is based on fish and produce from the land, such as corn, passion fruit, cassava and soy.