ELECTED THE FIFTH CITY
OF PARANA TO INVEST

Known nationally as the Capital of Agribusiness and as the city of porco no rolete, Toledo is in the western region of the state, on the border with Cascavel, and has 138,572 inhabitants. Initially called "Pouso Toledo", it was a nook for pilgrims to rest. With 1,197 km² of total area, the municipality has a fertile soil and is considered one of the largest grain producers in the State.

A survey published by Exame magazine in October 2018 places Toledo as the 5th best city in Paraná and the 43rd in Brazil to invest in business. Another standout for the city is the university campus. It is also known for housing the Biopark, the first Science and Technology Park of Biosciences of Paraná, which is under construction.

PORTO PORTO ROLETE
Every year, in September, the main gastronomic festival of the city takes place. The dish came from a competition between friends to find out who prepared the best porco no rolete. The event receives about 25 thousand visitors from all countries and, on average, about 300 pigs are baked. So you can jot down the agenda because it's mouth-watering.

HISTORICAL MUSEUM WILLY BARTY
It has a collection of documents, composed of newspapers, magazines and maps, as well as an image and sound sector, with interviews, which has attracted researchers, who use it as a source for the preparation of scholarly works, monographs, dissertations and dissemination of historical memory. 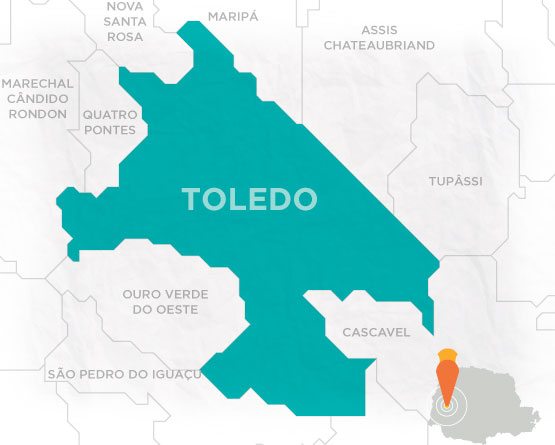 Theme Park of the Waters
The municipality of Toledo is the only one that has a park of this nature and access is free. With four thousand square meters, the place counts on swimming pools for children and adults, water slide, toboboia, kiosks, sombreiros, changing rooms and bathrooms.

Municipal Theater of Toledo
It is the largest of the Interior and the third largest of Paraná. It also hosts art exhibitions and book launches. It is located in the center of Toledo.

Municipal Aquarium Dr. Romolo Martinelli
The space was built from the structure of the Bonifácio Dewes Acoustic Shell. The physical area has 410 m2 and nine freshwater tanks, with fish of different sizes, habits and species. At the site, there is also a marine aquarium, with exotic fish and several corals. Altogether, more than 60 species are exposed, originating in the watersheds of the rivers Paraná, Iguaçu and Amazonas.

It has a wide hotel network, for different publics, including hotels of high standard.

As the economy of the city is strong in swine, gastronomy has developed around swine products. One of the delicious traditional dishes of the city is the porco no rolete.