Known for its border with Santa Catarina, União da Vitória has many other attractions. The city of the Southeast region, which has a little more than 57 thousand inhabitants, was the scene of battles of the Contestado War, an armed conflict that occurred between 1912 and 1916. Landowners and small landowners disputed with representatives of the federal and state powers a rich region in wood and yerba mate, which was between the States of Paraná and Santa Catarina, the so-called Contestado region.

Due to the consequences of this conflict, the municipality became the provisional capital of a new state - that of the Missions - which was disbanded as soon as the war came to an end. However, one of the most striking features of União da Vitória is the railroad. If today it separates the city from the Santa Catarina municipality of Porto União, in the past, when this territory was one, it was responsible for much progress and economic success.

While the memory was still preserved, time went by. And the União da Vitória of today, with influences of German, Italian, Polish, Ukrainian and Syrian-Lebanese immigrants, has transformed itself into a growing city, with the economy turned to the services sector.

Two major federal highways - the BR-153 and the BR-476 - and three highly respected higher education institutions help boost the city's revenue. But one of Vitoria's greatest riches is in the stories it keeps in every corner.

Marked by a railroad that divides the states of Santa Catarina and Paraná, União da Vitória offers rail tourism options. You can go for a stroll of maria-fumaça and visit a railway station that tells a little about the history of the Contestado War.

A statue of the Sacred Heart of Jesus - the second largest in Brazil - and one of the first churches to adapt the altar according to the standards of the Second Vatican Council, provide moments of faith and contemplation for the faithful and other tourists.

Historic or environmental, the city parks offer beauty, knowledge and fun. They are ideal for trips between friends or in the family.

Strolling around the city is an opportunity to immerse yourself in the rich local history. Important buildings, mostly in the Art Deco style, recount striking episodes of the almost 130 years of the municipality. Examples include the City Hall, the Cine Luz and the Municipal School Professor Serapião.

ART DÉCO STYLE BUILDINGS
In the central area of ​​the city, Art Deco buildings, dating from the 1930s, reflect a local cultural-historical moment marked by the desire to affirm a cultural identity and business success. The architectural features remind us of a pinion and refer to the feeling of belonging spread by the paranista movement. The visitation is only external.

SQUARES
Rich in history, União da Vitória eternalizes moments and characters from the past in pleasant squares distributed throughout the city. The Square of the Brazilian Expeditionary Force honors the more than 150 squares that left the region towards the battlefields of World War II. The Ukraine celebrates the people who immigrated to Paraná and became a major actor in the colonization of the state and the construction of the city. The Coronel Amazonas Square, built to pay tribute to the important local leadership that gives it its name, presents a large map of Brazil made of cement. The Praça da Divisa, which is on the border between the municipality and neighboring Santa Catarina, allows visitors to set foot in each state. 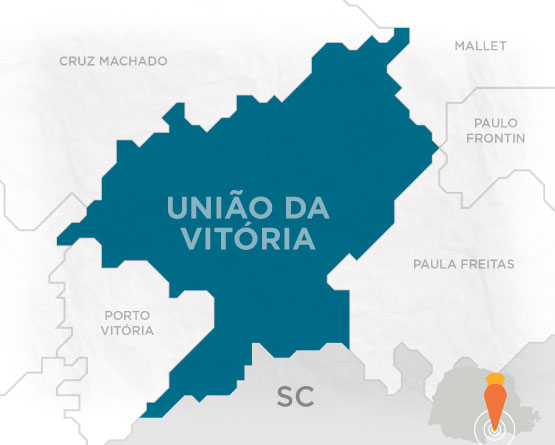 One of the few steam engines in Brazil, the locomotive has a wood-fired boiler and a stock of water and wood in the rear compartment. Built in 1913 in the United States, the composition helped make União da Vitória the fourth largest economy in Paraná at the beginning of the 20th century, especially when making the stretch between Porto União / União da Vitória and the port of São Francisco do Sul (SC ). Since 2005, it serves the city's railway tourism.

The archway and the Art Deco style, completed in 1941, combines architectural beauty and historical rescue. Considered one of the most beautiful and unique stations of the interior of Brazil, the building refers to the Contestado War. However, unlike the conflict over lands that opposed Paraná and Santa Catarina, the railway station, like the name, was built to congregate the two peoples. A pedestrian tunnel, linking the neighboring cities of União da Vitória in Paraná and Porto União in Santa Catarina, symbolizes this encounter.

Statue of the Sacred Heart of Jesus

Built in honor of the patron saint of the city, the statue is the second largest image of Jesus Christ in Brazil and loses only to that of Rio de Janeiro. At 27 meters high, set on a six-meter pedestal, the monument houses a chapel. To get to it, you have to climb 219 steps. It is located in one of the highest points of the city - Morro da Cruz -, offering a privileged view of the municipalities of União da Vitória (PR) and Porto União (SC)

The Iguassu Historical Park is an open-air museum that tells the story of the occupation along the Iguaçu River Valley, in the state's south-central region. On the site, centuries-old wooden houses form a village that recreates cultural aspects of German, Polish and Ukrainian immigrants. They offer hosting to visitors.

There are three main ways to get to the municipality. The fastest is the BR-476. Access is also possible through the same highway followed by PR-151. The third alternative is BR-280, followed by BR-116. Bus companies and an app ride offer the trip. The distance between União da Vitória and Curitiba is 243 km, which are covered in about 3:30.

The hotel chain of the city offers hotels and inns in different modalities, such as rural, urban, economic and luxury.

The municipality does not have a specific typical dish, but due to immigration, Ukrainian cuisine is quite traditional. Dishes like bórsch (beetroot soup), perohê (cooked pastries), holubsti (cabbage cheeses) and kutiá (sweet wheat) are successful. Traditional restaurants, oriental restaurants, pizzerias and snack bars also offer good food at varied prices.